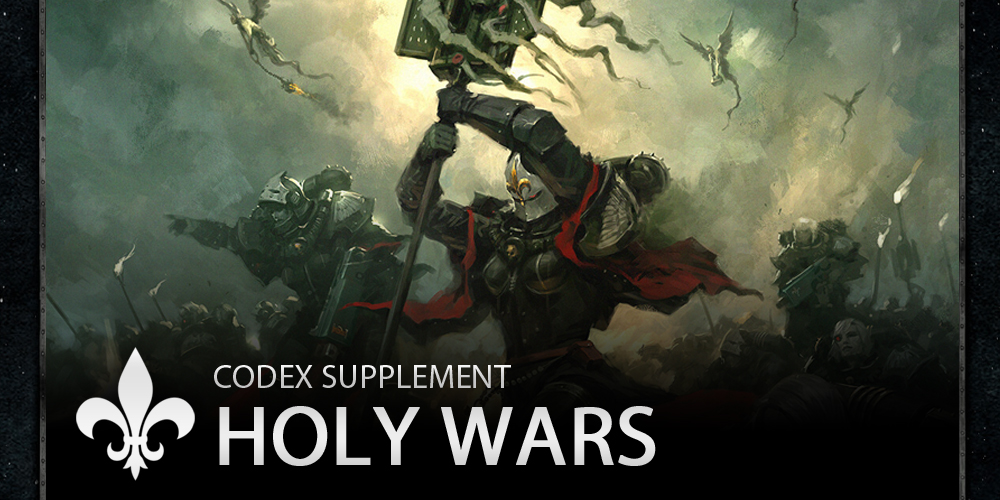 Hello everyone and welcome to another round of house rules for the Adepta Sororitas in the current 8th edition of Warhammer 40k. A few month after the release of their new codex, the Sisters of Battle feel a little weak and I decided to share a new approach on how to give our beloved Sisters a new kick.

Note that all of the following rules are just a collection of ideas and inspirations and naturally it is up to you, if you use any or all of them – And even though they are tested in as many games as possible and against a few different armies, we cannot warrant that they are really balanced or fair. (We are no play-testers after all, but always try our best)

With this being said, let’s jump into the Supplement: Holy Wars, meant to be used alongside the Codex: Adepta Sororitas.

The following data-sheet shall replace the one in the Codex: Adepta Sororitas and give a lot more variety to the Canoness’ loadout and introduce a jump pack option to make her more viable in different situations. 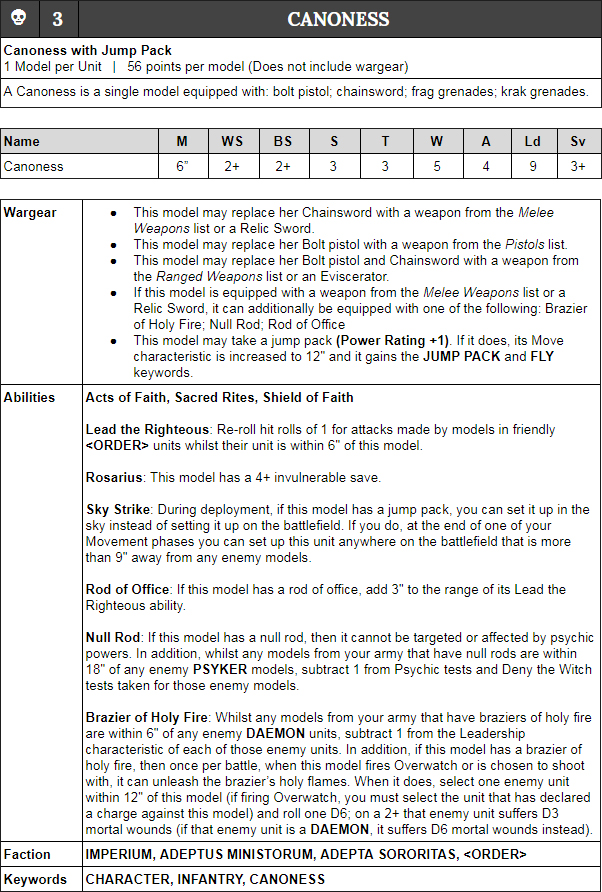 The point value for a normal Canoness is still 45 points, the jump pack option costs 56 points. An Eviscerator comes at 14 points.

The following data-sheet shall replace the one in the Codex: Adepta Sororitas and give a lot more variety to the Celestians’ loadout, introducing the Special Issue Boltgun (well known from Sternguard Veterans) and more Melee options. 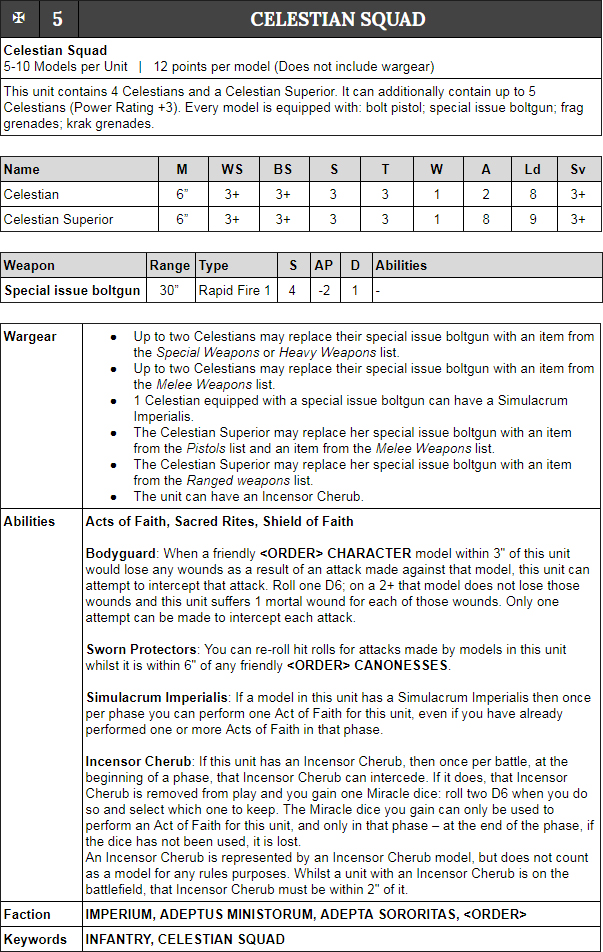 While the Bodyguard and Sworn Protectors rules are relatively nice, the higher point costs of the Celestians, compared to Battle Sisters, feels pretty awkward. Their current version in the Codex: Adepta Sororitas hardly benefits from the additional attack and better Weapon Skill and lacks something that really dinstinguishes them.

Equipping them with better weapons felt like the right approach and mixed with some melee power, these women now really feel special and have their niche in any Sororitas army.

The following data-sheet shall replace the one in the Codex: Adepta Sororitas and give the Crusaders a well needed extra-power in close combat situations. 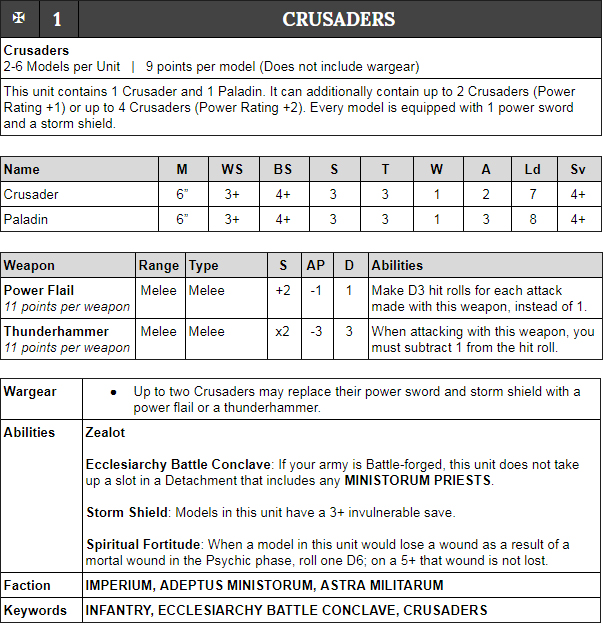 With a low strength and power swords only, the Crusaders were really no threat in close combat and only an option for tanking Overwatch or tarpitting other units. Giving them some serious power with 2 special weapons, they can now actually get something done – or killed.

A Legatine is a new HQ choice and limited to one model per army.

The Legatine is among the highest ranking Sisters in any Order Militant of the Adepta Sororitas. The most skilled of warriors and the greatest spiritual leaders the Sororitas possess, they inspire great devotion in those that follow them and are political powers in their own right in the Imperium. Most Legatines go on to serve as a Canoness Preceptor, Prioress or even the Canoness Superior of their Order. 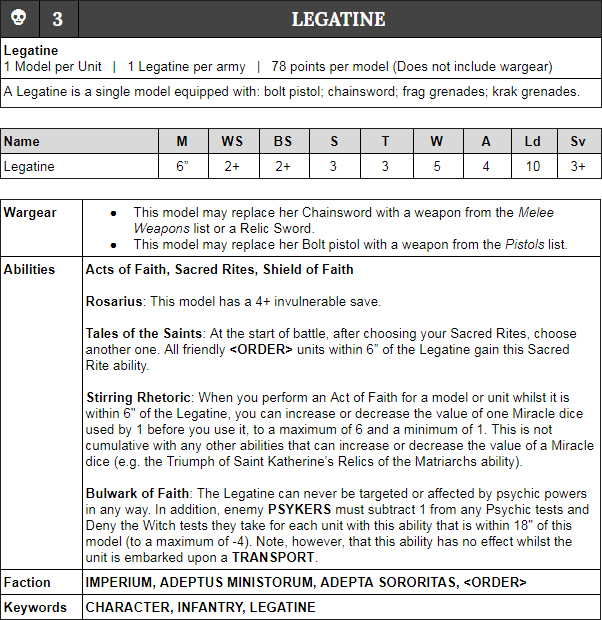 The Legatine combines many of the Sisters great abilities as Rites and Litanies. I imagine her model as a mixture of an Imagifier and a Canoness, but you can really go for any impressive model of a female warrior or saint.

Pious Recruits are a new Troop choice and an homage to the old Frateris Militia.

► The “Celestian Squad” is obviously a copy/paste mistake, sorry for that!

Contrary to the Milita, the Pious Recruits are more like aspirants though and all-female. They follow their Order to battle and hope for being chosen as one of them, even though chances are small. 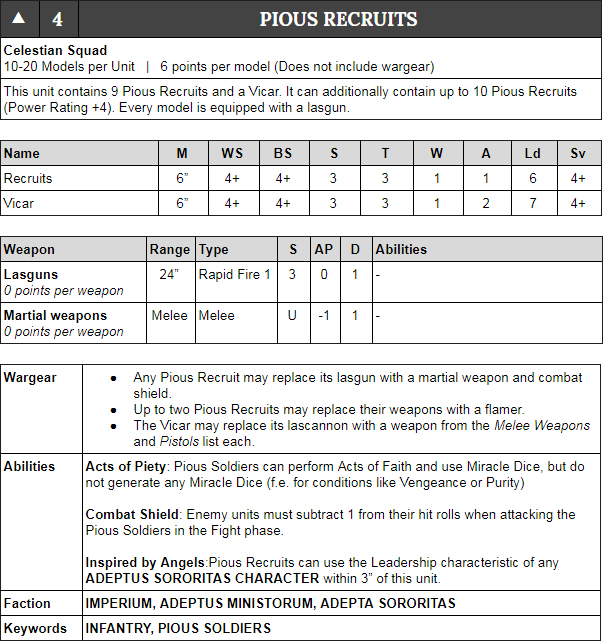 The Recruits are meant as an alternative to the Battle Sisters and an addition to the Troop slot of your army – giving some variety in models also. While they share the Adepta Sororitas keyword, they are no part of the <Order> and don’t benefit from the respective rules.

To build some recruits, just look for models like Knights or Man-at-Arms from other games and try modifying them a little. A medieval warrior with a lasgun in hand, will do the trick better than you might think.

The Emperors Chosen are a new Elite choice and a result of the Psychic Awakening.

Some of the most devoted Sisters had such a strong believe, that in the wake of the Psychic Awakening, the full power of the Emperors might hit them and transformed them in some sort of Angels incarnate. Not only did their physical form change, they also got a feeling for the psychic powers of the warp and how to handle them. 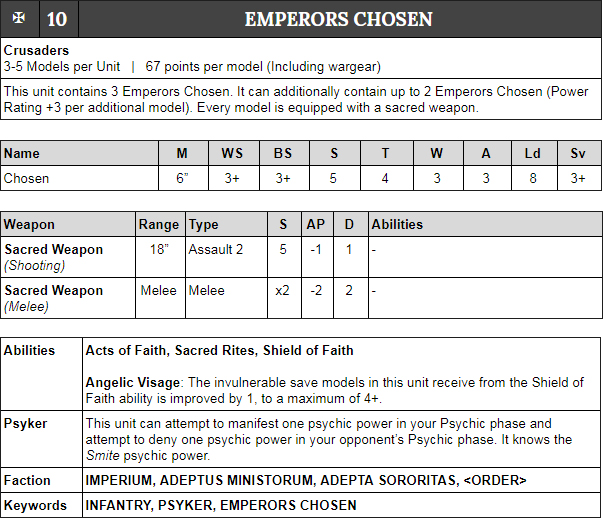 I think this is the most debatable unit of this supplement, for it might not fit into the Sisters fluff of non-psykers and non-overhuman soldiers – beside the living saints.

Anyway, I really wanted to try such a unit and I was looking for a way to use some Stormcast Eternals *cough*.

The Cherubim (or Cherubs) are not only a great visual addition to every Sororitas army. With the new Incensor and Armorium Cherubs, they also play an important role in battle.

To further utilize these puffy little angels, two new sorts of Cherubs are introduced and the availability of all of them a little expanded. 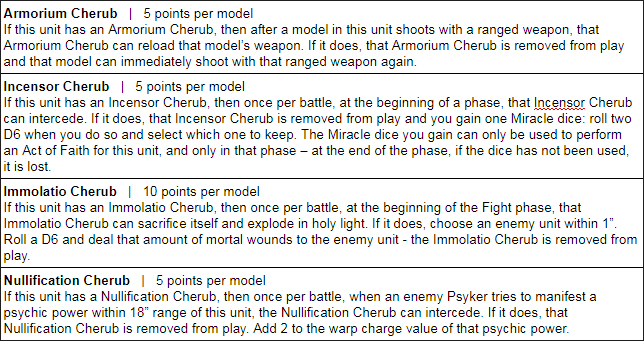 The following list is a modification of the datasheets in the Codex: Adepta Sororitas, allowing new units to take Cherubs and even changing their amount.

Note that a unit can take more than 1 Cherub of the same type, but in every round, only one Cherub per unit can be “used”.

Use this Stratagem before the battle begins. Select a BATTLE SISTER unit from your army; that unit gains the “Bolter Discipline” ability:

Instead of following the normal rules for Rapid Fire weapons, models in this unit  firing Rapid Fire bolt weapons make double the number of attacks if any of the  following apply:

Use this Stratagem before the battle. Your army can have two extra Relics of the Ecclesiarchy. All of the Relics your army includes must be different and be given to different models. Cannot be combined with the “Open the Reliquaries” Stratagem.

And that’s it. Maybe you find one or two of these changes helpful and give it a try in your next game. If so, feel free to comment and let me know if it was useful and fun, or just a waste of everyones time 😉

May the Emperor protect you!