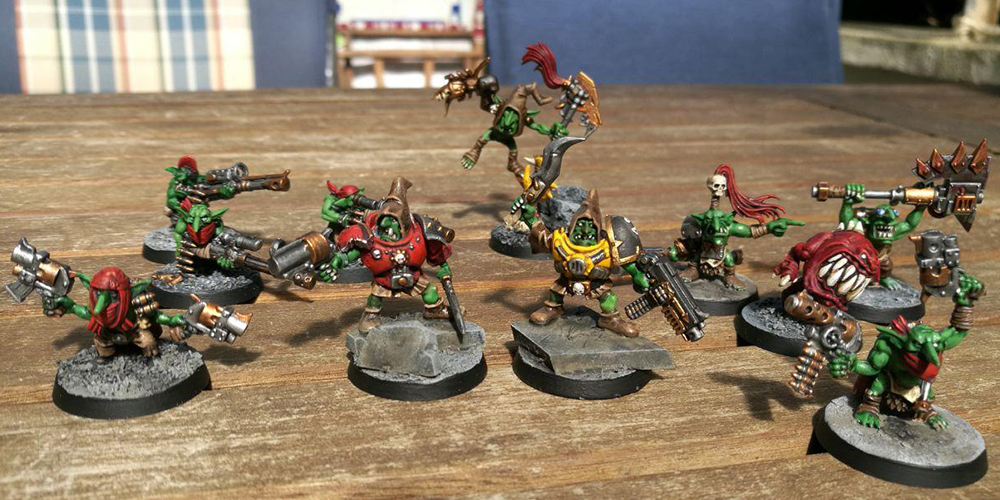 Strange times like these, lead to strange ideas and projects … and while I was already working on a Codex for Grots a while ago (even though I ended the project due to lack of time) I decided to build and paint some new Grot models and add some rules for them in a later post.

So yeah, this is basically what I’m doing in the few minutes when my family is occupied otherwise and Sisters get “odd” 😉

Maybe it will inspire some of you to finally get these crazy ideas in your heads running!

Behold the glorious Grot Bodyguards. Dressed and protected by the finest Space Marine garbage, these little guys are as tough as it gets.

You might know the Kelermorphs, but have you ever met the Grotslingers? The personified, whirling, Pistol-Death … or so they say.

The Psychos are real Berserks in Melee, but only after eating their famous, psychodelic Mushrooms. Rumours say these Mushrooms can sometimes kill their consumer, but that’s just bad propaganda!

When it comes to Psychic powers, only few can compete with the mighty Grot Shamans. Even though their power is only growing with several of them.

Last but not least, the Grot Snipers are the perfect support from far away, the most beloved area of battle for every Grot – except the Psychos maybe.

So far so good, a funny bunch they are, but there are lots of other units waiting to be painted. And as mentioned above, all ready to receive some rules as “Mercenaries” for your Ork army, or even a real Grot army on their own.

I hope you like this little excursion and hopefully we see each other next time with more Grot awesomeness!