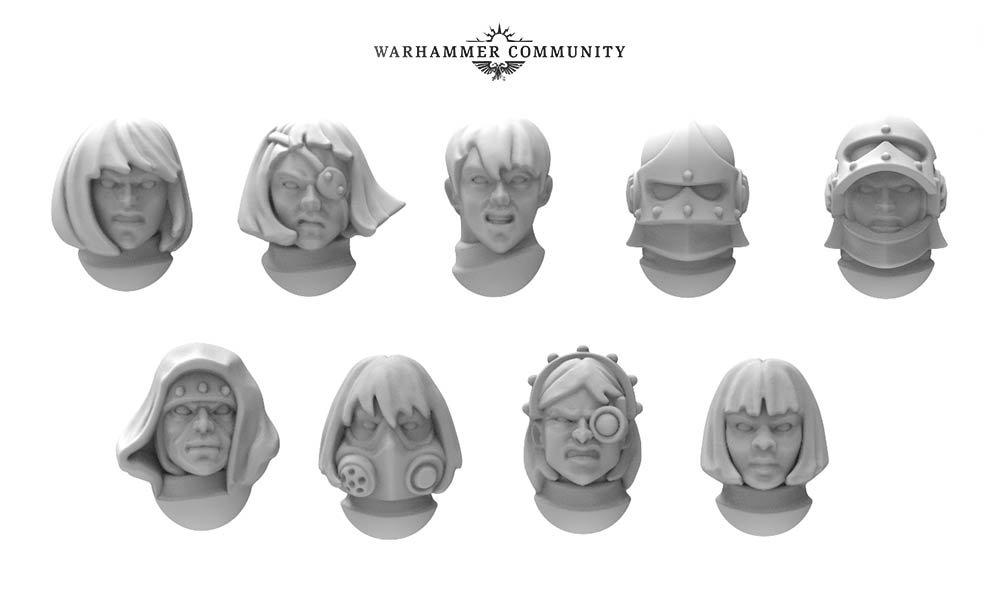 NOVA Open 2018 is going and luckily, Games Workshop used the time to give us some more previews from the upcoming Sisters of Battle product line. This time, it’s all about their heads and helmets and the first glimpse on the Chapter Approved contents for the Adeptus Sororitas.

You guys want some Sisters of Battle news?

Here’s a little peek behind the curtain at some early designs for the visages of the faithful – from pious initiates to battle-hardened Sisters Superior.

The Sisters of Battle are a varied force, with members hailing from across the galaxy in pursuit of holy war. This time around, we’ve been able to represent that with a range of characterful new faces you’ll be able to include in your army.

So here they are, the first pictures of the new Sisters heads and helmets and as suspected, they look gorgeous. And not only that, they offer a wide variety of flair.

First up we see the classic bangs for nearly all models. The most iconic hairstyle in the galaxy one might say. (Thinking about a whole army) And even though I’m not a big fan of this hairstyle, I really got used to it and nothing else could have been expected.

But what really caught my eye, was the helmet in typical Sabbat style, but with an open version. The referring to a Sallet is obvious, but nontheless amazing. And keep in mind, that this is the standard helmet of the Sisters of Battle. Really looking forward to a whole bunch of them!

Next, we have two other heads to closely look at, for they might give as a first impression of Non-Standard units:

On the left, we have the cloaked head of what looks like a nun. As far as I know, there is no official unit in the game, that already has this sort of headware, but a few units come to mind when thinking about it.

The right one though, heavily reminds me of a Seraphim we already know from the existing models

So all in all, we have a nice mixture of well-known and iconic styles and a hand full of new twists. I’m really looking forward to see the first actually produced and painted miniatures and of course to which units they belong!

Speaking of which: Games Workshop also gave a first impression of what will be included in this years Chapter Approved 2018.

This year’s Chapter Approved will feature a beta codex for the Adepta Sororitas – and we’re inviting you to try it out. You’ll have access to a huge pool of units, Stratagems, Relics and Warlord Traits to represent the orders of the Adepta Sororitas in your games – and your feedback on how you find them will help us make the final codex as awesome as it can possibly be.

Most important for me, is the “huge pool of units”. We still don’t know if the Adeptus Ministorum Units like Death Cult Assassins, Repentant Engines and so on will be part of the codex, but if not, this hints to some cool new stuff. (Perhaps we even get something fresh while also taking the Ministorum with us)

Anyway, I’m really looking forward to the Chapter Approved and of course I’ll keep you updated on everything I find.