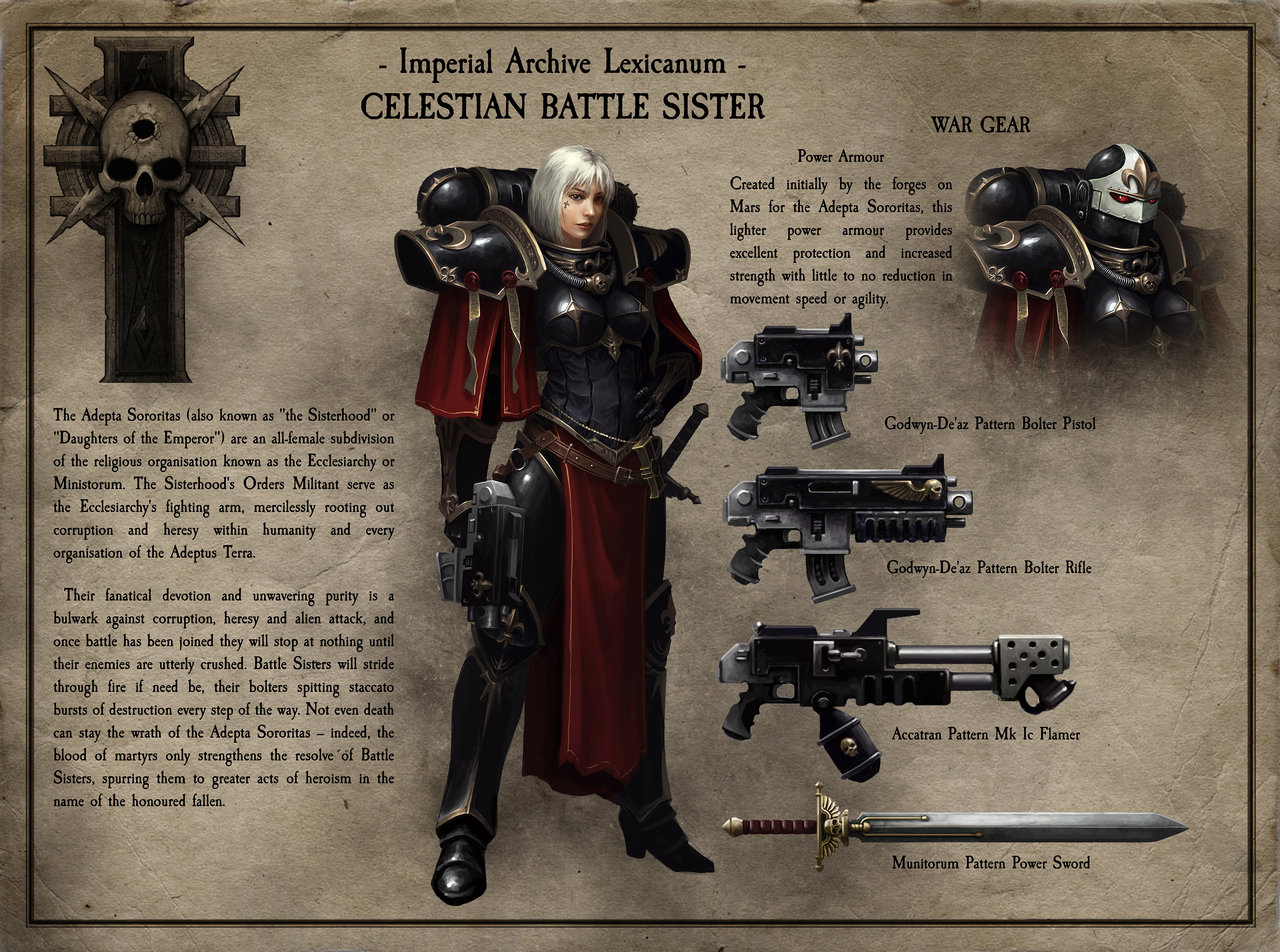 Today we’ll have a look at the most iconic pieces of wargear of the Adepta Sororitas. Some practical, others devotional, but all of them a firm part of the Sisterhood.

The power armour worn by the Orders Militant is based upon the same archaic systems as that worn by their brethren of the Adeptus Astartes. It provides the same degree of armoured protection, yet must forego the more advanced life-support systems and strength enhancing abilities used by the Space Marines, as the Sisters of Battle are not implanted with the Black Carapace that allows the Astartes to interface fully with their own armour. Despite this, the Sisters of Battle are one of the few Imperial forces outside of the Space Marines to be granted the right to wear such formidable armour, and they are trained to deadly effect to utilise its abilities to the full.

Commissioned by Goge Vandire, it is the only part of his legacy that was not removed along with his head. Created initially by the forges on Mars for the Adepta Sororitas, this lighter power armour provides excellent protection and increased strength with little to no reduction in movement speed or agility. Similar to the light power armour often used by many Inquisitors, the Sororitas Power Armour has an extended operating life. Sisters of Battle do not have the advanced Black Carapaceof the Adeptus Astartes, however, the Sisters are trained to use their power armour to its fullest.

The armour uses a similar power supply as the armour for the Adeptus Astartes and does not run out of power unless damaged. As an optional item, Battle-Sisters also sometimes wear the Sabbat Pattern Sororitas Helm, the standard pattern worn by the majority of Battle-Sisters since the mid-38th Millennium.

Often serving in combat zones, Sisters Hospitaller require more protection than other Non-militant Orders. The distinctive armour is a welcome sight to injured guardsmen and Acolytes alike, an angel of mercy sent by the God-Emperor himself. In addition to its protective qualities, the hooded habit is often coated in incense and unguents and the rest of the armour is sealed and treated against toxins.

The Order Hospitaller equips its Sisters with the best battlefield medicine tools found outside the Apothecaries of the Adeptus Astartes. The kit has a variety of sacred oils, unguents, surgical tools, and sterilisers to help those who lay wounded in battle.

The standard pattern worn by the majority of Battle-Sisters since the mid 38th millenium, this helm contains an integrated rebreather, allowing the Sister to operate in total vacuum for limited periods. The visor provides fullspectrum filtering and limited psycho-oculal buffering, allowing the Sister to fight on where a less well-equipped warrior would be rendered insensible by adverse battlefield conditions. The second helmet shown is a variant of the Sabbat pattern, mounting the fleur de lys symbol of the Sisterhood upon the front, an honour normally reserved for those Sisters who have performed with exceptional courage and honour. It is also common amongst the elite Celestian squads.

For the Battle Sisters of the Calixis Sector, this helm is issued only after they have proven themselves worthy of wearing it.

The standard issue weapon for all Battle Sisters since the Orders Militant were formed, the Godwyn-De-az pattern boltgun has remained unchanged for millenia, largely due to
its superior performance in comparison to other weapons of its class. But the Godwyn-De’az is much more than a weapon to the Sisters of Battle; it is a symbol of the Emperor’s
divine judgement, the first and foremost of the ‘holy trinity’ of bolter, flamer, and melta with which the Adepta Sororitas bring justice to the manifold enemies of Mankind.

The Godwyn-De’az Pattern is designed to be used by a normal human and thus is much smaller than an Astartes Bolter. This pattern of Bolter is designed to make use of the Sarissa as an attachment. The Sarissa is a vicious, curved, bayonet-like blade that can transform the Godwyn-De’az Bolter into an effective close combat weapon even as it retains all of its ranged functionality.

Some of the most precious artefacts in the possession of the Holy Ordos, Simulacrum Imperialis are holy symbols of the Ecclesiarchy that were once borne by a Saint of the Imperium, or have been fashioned from the bones of a Saint. Brought out only rarely, usually when the forces of heresy and the warp are at their worst, a Simulacrum Imperialis is often carried at the forefront of an Adepta Sororitas battle group. Considered one of the purest symbols of the Ecclesiarchy and the might of faith in the God-Emperor, the mere sight of Simulacrum Imperialis is often sufficient to raise the spirit and fighting zeal of any nearby allies. These holy symbols are wellsprings of inspiration and faith and it is a great honour to carry such an irreplaceable relic into battle.

Every member of the Sisterhood bears one of these icons of the Ecclesiarchy, worn  around the neck or waist on a string of adamantium beads. Each bead represents an act of penitence undertaken by the bearer, though in the case of long-serving members, each bead may count ten, 100, or even 1,000 such acts. The Adepta Sororitas ever strive
to honour the sacrifice made by the Emperor by emulating His example.

Devoted to the Ecclesiarchy in mind and body, the Adepta Sororitas often bear tattoos, ritual scaring or other markings that display their loyalty. The Fleur De Lys is a symbol of the Sisterhood but a Sister might also bear markings of the Ecclesiarchy or the Inquisition. In addition roses, wings or other Order-specific icons might be chosen by a Sister.

Proclaiming the power of the Emperor in heavenly tones, a Laud Hailer bolsters the spirits of the faithful.

– Sister Sephi of the Order of the Lexicon

Many sisters of the Ordo Dialogous choose to carry the Dialogous staff. These hardy staffs are fitted with a Laud Hailer and an audio recording device and can be used in combat if necessary.

Constructed from layers of armaplas and ceramite, these shields are said to contain small fragments of armour originally worn by the Emperor. They are only found among the Adepta Sororitas, and even then are only issued to those Sisters who excel (and prefer to engage in) hand-to-hand combat. Due to the weight of the Praesidium Protectiva, it can only be used by a Sister wearing Sororitas Power Armour.

These psycho-conductive neural whips are often carried by Mistresses of Repentance and are as much symbols of rank as they are vicious weapons that can slice open armour and flesh alike.

“Should any Sister, in her deeds or thoughts, sin, she should willingly and immediately make her fault known to her Superior, and amend with a pure heart. If she does not usually fail in this manner, let her be given but a week’s penance, but if her sin is great, let her go apart from the company of her Sisters, so that she may not sit at table with them, nor kneel in prayer at their side. Let her go alone, submitting herself to the will of the almighty God-Emperor of Mankind. Let her don the hood of the penitent and take up the ceremonial Eviscerator, and seek her redemption upon the field of battle.”

– Rule CCCLIX, the Rule of the Sororitas, Volume VI

An Eviscerator is an obscenely large double-handed Chain Weapon that is favoured by Ecclesiarchy zealots, Witch-Hunters, the Sister Repentia of the Adepta Sororitas and certain Assault Marines of the Adeptus Astartes. This Chain Weapon is fitted with a crude version of the disruption field generator more commonly found on Power Weapons. Although very unwieldy and tiring to use, the Eviscerator is fully capable of bisecting an armoured man or tearing open the most blasphemously corrupted mutant in a single stroke of its gargantuan blade. It can slice through walls and even damage vehicles. Since it must be wielded with both hands it cannot be used in combination with another close combat weapon. 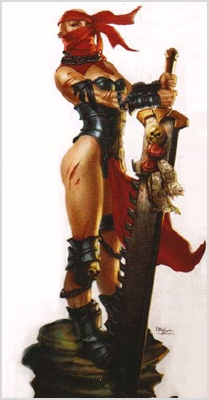 The deadly Inferno Pistol can burn through even the most fortified of structures or armour. It is well known that if one weapon will do, two will do twice as well. The Seraphim Inferno Pistols are designed to work as a pair and can be used while in hand-to-hand combat by specially trained Seraphim.

Designed for use in pairs, Seraphim Hand Flamers can spew forth gouts of fl ame from both pistols at once. In addition the hand flamers are designed to be used in melee combat and can release small controlled bursts of flame that use negligible amounts of Promethium. The weapon can be used both as a ranged weapon and a melee weapon by those who are properly trained.

Of course, the armory of the Sisters is much bigger than what we covered today. If you want to get more insights, including the standard weaponry and such, here is a great video from ArchWarhammer!

I hope you enjoyed todays excursion and for feedback, feel free to comment!

May the emperor be with you.