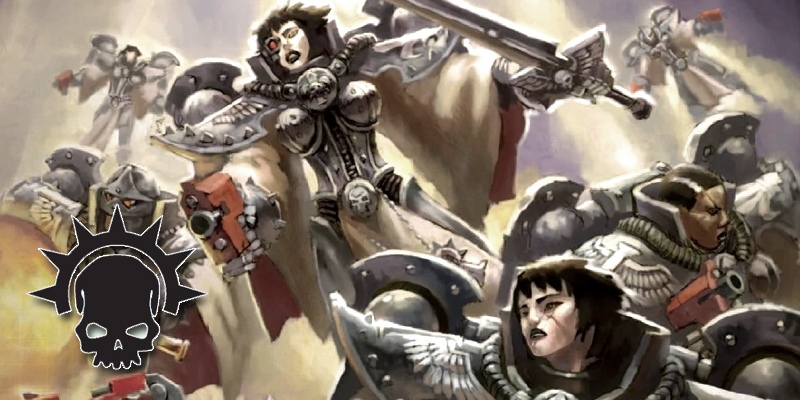 The Order of the Argent Shroud

(A collection of gathered and mostly copied informations + House Rules)

A single man with faith can triumph over a legion of the faithless. Untold billions of the faithful can never be opposed.

Like the other founding Saints of the Sororitas, Silvana was one of five sisters and a member of Alicia Dominica’s bodyguard when she was taken before the Golden Throne. She is noted for the many selfless acts of self-sacrifice she performed throughout her life, and Sisters who have survived a battle despite terrible odds often invoke her name in thanks for deliverance from the forces of evil. She was one of the first Sisters to lead Holy Crusades in the name of the Emperor of Mankind. In the late 36th Millennium, Silvana is said to have died after being poisoned by a Death Cult Assassin, and legend states that her body mysteriously vanished after having laid in state for a week within the Inner Sanctum of the Convent Prioris. A silvery image of her bones was left imprinted on her death shroud, which is revered as one of the Sisterhood’s most holy relics, and that gives the Order its title. The image most often associated with Saint Silvana is the death shroud, imprinted with the ghostly image of her skeleton. She was declared an Imperial Saint by the unanimous vote of the Holy Synod of the Ecclesiarchy. Silvana was renowned for her altruistic spirit and her stoic faith. She seldom spoke, believing that deeds on the battlefield spoke more of a warrior’s devotion than any words. The Sisters of the Argent Shroud likewise rarely speak, and they are famed for their selfless acts of heroism. As such, the Order fields a high number of Celestian and Seraphim squads, their faith a shield as strong as their silver armour and their righteousness a weapon as potent as Bolter fire.

As the name of the Order suggests, these Battle Sisters wear silver Power Armour coupled with white cloaks that have red linings. The weapons that they bear are also red.

Their Order’s iconography is that of an ebon skull with an Iron Halo.

The Order in Battle

The following rules are based on informations about the new codex of November 2019.

Order Convictions – Deeds, Not Words: When a model with this Conviction advances, it can fire its weapons as if moved without Advancing.

Relics – Quicksilver Veil: -1 to hit a model with this relic.

Stratagems – Faith is Our Shield (1CP): 5+ FnP against mortal wounds in the Psychic Phase.

Notable wars of the Order

Under Canoness Preceptor Chrisima, the Order of the Argent Shroud enforced the pogroms of the notorious Confessor Petasus against the mutants of Charak, cleansing the streets with their holy flamers of the foul taint of genetic deviancy.

The Achilus Crusade is an ongoing Crusade of the Imperium, begun in 777,M41 to reclaim the Jericho Reach region from Xenos and Heretics. Under the command of Lord General Militant Solomon Tetrarchus, he commands not only Imperial Guard detachments but also Space Marine detachments, Titan Legions, Adeptus Mechanicus forces and small Detachments of several Orders of the Adeptus Sororitas.

When the largest OrkWAAAGH! ever raised, led by the Warlord Ghazghkull Mag Uruk Thraka, assaulted the Armageddon Sector and began the Third War for Armageddon, the Order of the Argent Shroud responded in kind. They sent seven whole companies of Battle Sisters to assist the beleaguered sector. Four companies were deployed to the Fire Wastes, whilst the remaining three companies spread throughout almost every war zone on Armageddon. In one notable incident during the brutal campaign, the Order found themselves fighting alongside Armageddon militia and the notorious Flesh Tearers Space Marine Chapter. Chapter Master Gabriel Sethdenied Canoness Carmina any tactical counsel whatsoever. After nearly a century in leading her Sisters to war, occasionally alongside Marine Chapters, this treatment came as no surprise. But the Order’s main grievance was with the way the notorious Chapter conducted themselves during the ensuing battle. The Battle Sisters struck Warlord Rukglum’s army as it changed positions from shelling the mining outpost of Gaius Point, to occupying the settlement. Battered by three days’ bombardment, the population of Gaius Point had dug underground and, under the careful ministrations of the Order’s Sisters Superior, were determined to form an ad hoc militia to defend their homes. The Flesh Tearers launched their attack on the Ork column when it was approximately one Imperial Mile from Gaius Point and, hitting the Orks in the rear and flanks, they drove the disorganised enemy into the Battle Sister’s waiting guns. Caught between Sister and Marine, many Orks were slaughtered, with the survivors mounting their vehicles to escape with all haste. The Sisters first noticed something was very wrong when three mobs of Orks, deserted by their cowardly leaders, formed up and assaulted their front line, choosing to engage the Gaius Point militia, rather than the Sisters’ deadly accurate bolt guns. The Flesh Tearers, apparently driven mad by some kind of battle frenzy, crashed into the Ork’s rear ranks just as the first Orks reached the militia. The Flesh Tearers fell upon the Orks in an orgy of blood letting. Many Marines removed their helmets and, eschewing the use of pistols and other ranged weapons, set about the Orks with chainsword and knife and tooth. Canoness Carmina witnessed in mute horror, Marines ripping out the throats of Orks with their bared teeth. The raw fury and love of carnage she saw in their faces as they literally tore the enemy apart made her shudder in fear. The Orks were annihilated within seconds of the Marines’ attack, but the small number of the enemy were simply not enough for the Fleshtearers who by now seemed to have been driven into a fever pitch of absolute blood lust. With no more Orks for them to butcher, they scrambled over the barricades on the perimeter of Gaius Point and smashed into the thin line of militia. Properly driven into a true battle frenzy now, the Flesh Tearers performed acts of the most debauched nature in the name of violence. Men, women and youths, all fell beneath their blades. The old, the infirm, none were spared the Flesh Tearers’ crazed attack. One of the Order’s Sister Superiors later reported that she had personally witnessed cannibalistic acts committed by the frenzied Marines. The Canoness did not witness this, but she believe the Sister Superior’s report. She ordered a hasty withdrawal of her Sisters from the Flesh Tearers with all haste, before they reached their positions. The Canoness later reported the incident to the Inquisition. Her report stated that the Flesh Tearers were unstable beyond redemption and that they were not fit for duty anywhere within their mighty Imperium. The Canononess firmly believed that it was evident that the Flesh Tearers had devolved far beyond any point reached by a loyalist Chapter and requested their immediate destruction. In a separate incident, the Sisters garrisoning the fortified basilica of the Temple of the Emperor Ascendant, located within Hive Helsreach, was overrun and destroyed. Many of the sacred relics of the world’s first colonists were lost. Then-Reclusiarch Grimaldus of the Black Templars (one of only a handful of survivors) managed to save some of these precious relics.

~M42 – The Battle of Gathalamor

The Battle of Gathalamor occurred during the Indomitus Crusade after the creation of the Great Rift and began when the Word Bearers Chaos Space Marines assailed the holy Imperial world of Gathalamor Prime. Their Dark Apostles summoned Daemons, and the fight turned viciously against the Imperial defenders, which included the Mordian 84th Regiment and Order of the Argent Shroud. These brave souls dug in to stage their last stand in the ruins of Gathalamor’s macro-cathedral. As the hordes of traitors mobilized for the final attack, the Indomitus Crusade arrived in the form of a combined force of Adeptus Custodes and Grey Knights under the leadership of Captain-General Trajann Valoris and Grand Master Voldus. The new reinforcements shattered the traitor army into battling warbands.

Inspired by the arrival of these demigods, the Mordians and Sisters of Battle advanced, prayer songs rising from their ranks. The Word Bearers and their Daemonic allies launched a savage counter-attack, but, after three days of vicious fighting, the traitors were broken in the Battle for the Statue Steps. With fresh Imperial reinforcements arriving, the Custodes departed for Terra while the Grey Knights began the grim purge of those they had rescued in the macro-cathedral, for they knew too much of Chaos.

Notable heroes of the Order

Silvana is the patron and founder the Order of the Argent Shroud. She was one of five companions of Alicia Dominica, the patron and founder of the Adepta Sororitas. She was one of the first Sisters to lead Holy Crusades in the name of the Emperor of Mankind. In mid-late M36, Silvana met her fate at the hands of a Death Cult Assassin. Her remains disappeared whilst lying in state at the Convent Prioris. She was declared a saint by unanimous vote of the Holy Synod.

An overzealous Canoness who attacked the forward bases of the Angels Vermillion Space Marine Chapter whilst the Order was under her leadership in 822.M41.

Sindal the leader of the 97 Battle-Sisters who guarded the Temple of the Emperor Ascendant during the siege of Hive Helsreach in the Third War for Armageddon. Despite her advanced age, she fought alongside Reclusiarch Grimaldus and the Black Templars Space Marine Chapter until the Temple’s destruction by the Orks. She, along with every Sister stationed at the Temple, perished during the conflict.

Prayer may cleanse the soul, but pain cleanses the body. Both are necessary for the survival of humanity.