Today dear friends, let’s take a look at the next big chapter in the history of Warhammer 40k – The Psychic Awakening. And especially the role of the Adpeta Sororitas within it.

Be aware that all this is pure speculation and wishful thinking 😉

(► Latest updates on the 2nd part of the Psychic Awakening)

As we all might have heard by now, a galaxy-wide event is about to happen in the Warhammer 40k universe – The Psychic Awakening. An event so massive and impactful, that even the events of the shattered Cadian Gate, leading to the Cicatrix Maledictum and tearing the galaxy apart and the even the Horus Heresy (!) cannot match its significance for Mankind.

And as Games Workshop said it: “Psychic Awakening is a monumental event that will shape Warhammer 40,000 forever, on a scale unlike anything you’ve ever seen before. Across this epic event, every codex will see expanded rules as we explore the front-line war zones of a cataclysmic new conflict that makes the 13th Black Crusade look like a border scuffle.”

Beside the excitement that this event triggers in me by itself, another news is much more interessting right now. “Every single Warhammer 40,000 faction has a stake in Psychic Awakening – so whatever your chosen army, you’ll have a moment to shine. […] each book will have powerful and thematic rules updates for at least two Factions, giving you more flexibility than before.”

Yes, this also includes the Sisters of Battle, as this grafic cleary shows and removes all doubts:

To get a better understanding of what the Awakening initiates, here’s the description of the offical site – definitely the place to be when it comes to updates and informations!

The Cicatrix Maledictum has torn the galaxy in half, allowing the corrupting energies of the warp to boil through the wound in reality. The presence of so much raw empyric energy has created untold havoc throughout the Imperium, driving some populations mad, heightening tensions in otherwise pacified regions, and escalating conflicts all along the Great Rift.

The psychically sensitive have felt the impact most keenly, but there are far-reaching consequences for every race and faction. This phenomenon has been dubbed the Psychic Awakening, and it is only increasing in severity. A locus of extreme disturbance can be identified by a rising swirl of dark energies, signaling inevitable terror and death.

So in essence, it seems all about the Warp, its inhabitants and Psychic powers all across the universe. So let’s take this few informations and see, where the Sisters might have their role in it, where they can shine. And right now, I could see 2 possible interactions with the events of the Awakening.

1. A Beacon in the growing Darkness

The first one is quite easy and definitely less spectacular as the second, but when it comes to psychic powers, the Sisters will come to peoples mind due to their “Shield of Faith” ability, right?

They have this special – though mostly useless – ability, to deny psychic powers as Non-Psykers. The problem is the chance of success. You roll a single D6 and try to surpass the psychic test of an enemy psyker – obviously rolling 2 D6. That’s quite a task and will rarely succeed. It will rarely change the tides.

With the growing powers of the warp in Awakening, maybe the Sisters rise in their faith – or better said – their faith is answered in a stronger fashion also. The prayers of the Sisters are clearly heard and while the Great Rift is a growing threat to the galaxy, maybe the Sisters can benefit from it with growing powers themselves – this is based on the idea, that the Emperor is one of the most powerful psykers in the universe and that the Faith in his person, becomes a real power, therefore intertwined with the Warp.

Rulewise, they could act as some sort of counter part to these growing psychic powers. They get better at deflecting spells or become more resilient against their effects. Maybe there is also a new character who’s acting as a Beacon of Faith by itself and blocking psychic powers even more effective.

That would be a simple change to the “Shield of Faith” ability and would include the Sisters strongly into the new narrative, by becoming a weapon against the storm. Where they appear, mankind breathes hope and recovers from the pressure of the new psychic threat.

On a side note: This suit would fit the Sisters of Silence even better. Maybe there is hope for them as part of the Inquisition or the Talons of the Emperor…

Alright, this is where we get a little more funky! I will talk about the Living Saints.

We all know and love our Saint Celestine, but little do most of us know about her being and more importantly right know, the origin of Living Saints in general. So let’s dive into the story of the Saints – at least a little.

Living Saints are individuals – mostly from the ranks of the Adepta Sororitas, though not exclusively – who are canonized in their lifetime. Sometimes for resurrecting the Dead, sometimes for rapidly healing themselves or others, sometimes for setting demons and other creatures of the Warp aflame. All in all, some pretty good reasons to call somebody a Saint in the grim dark.

The key ability of the Saints, is to be resurrected after dying in the Emperors name, and supporting the Imperium of Men when the situation is most dire and hopeless.

While such a resurrection needs some sort of relic to be successful – a sort of catalyst to be summoned from the dead – it is also believed that the Emperor himself brings them back to life in the end. And as we know, the powers of the Emperor are heavily intertwined with the warp.

This is also reflected in the Saints other powers, like casting holy fire upon their enemies and wielding holy weapons. And of course the fact that a Living Saint seems to be near immune to the taint of the warp.

All clues combined seem to assure that Living Saints draw their powers from the God-Emperor and from the warp itself. Reading the novel “Celestine” will also show very detailed, that Celestine, whenever she dies, awakens in the Warp and has to go through hell to get herself back together and communicates with the Emperor. So yeah, Living Saints are at least heavily interacting with the warp, if not creatures of the warp at all.

(By the way, there are some pretty interessting – though obviously heretical! – theories, about Saints being imperial demons 😉 40k Theories)

And that leads to a lot of possibilities for the Psychic Awakening!

For those who remember, there was a time when “Living Saints” were a unit option in the Sisters of Battle Codices. And not only for one edition. So what if GW would bring back these Holy Avengers?

The Psychic Awakening clearly empowers those who use the powers of the warp. That is the case for the Living Saints and would not only make them stronger, but maybe it gets easier to be resurrected and called to aid.

What I’m talking about is a next level of Saints. We have the really strong ones as named characters, like Saint Celestine and maybe a new one introduced and next to that, some yet nameless Saints to fill the roles of “lesser” HQ Choices. But still a great addition to the Canonesses! 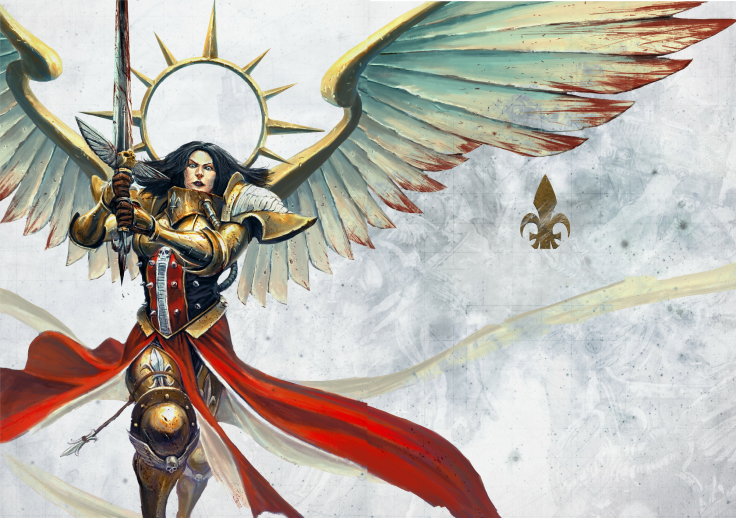 And if that’s not enough, give the Saints some sort of Psychic abilities to choose from. Looking at all the Space Marine Chapters getting their own Psychic powers right now, why not transfer this trend to the Saints? It would give the players a lot more options to choose from, and some of these powers could be strongly connected to the Acts of Faith for example.

And last but not least, make the “normal” Saints customisable! How cool would that be? Creating your own Saint, based on its own story, perfectly fitting your own Order? But yes, I digress.

Anyway, what do you think about these ideas and what are you looking for with the Psychic Awakening drawing near? Let me know and may the Emperor protect you!

One thought on “The Psychic Awakening and the Sisters of Battle”