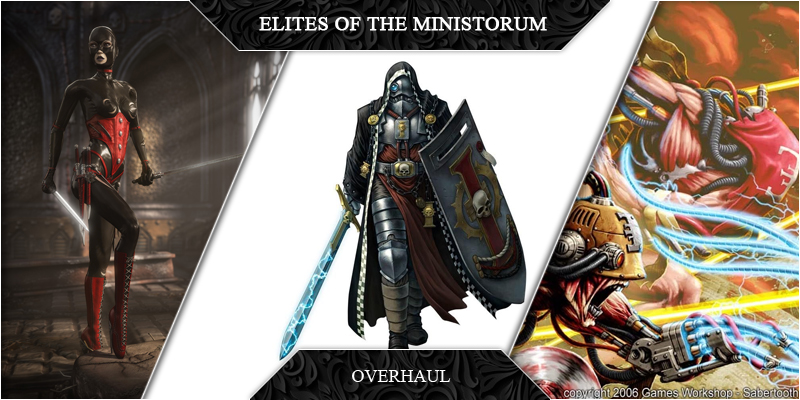 After introducing some completely new units like the Legatine and the Maiden of Vengeance, we thought it was time for some overhaul of existing units – namely the Ministorum Elites. Crusaders, Death Cult Assassins and Arco-Flagellants.

While all of them can currently execute some special tasks, it feels boring that there are no options for variation or customisation and no leaders in their ranks. So here are some adjustments for the existing lists.

Remember, these are house-rules and I’m happy for testing and feedback 🙂

The variety of weapons, especially the new stormflail, give some flexibility to the unit and opens up for some adjustments due to your enemies. The additional Paladin in the squad also brings some more fighting power and leads to a small point increase per model.

The Death Cult Assassins got a new option for poison blades, based on the Callidus Assassin and now have also a ranged weapon option in form of the needle pistols of the Inquisition. Both weapon choices are based on the Assassins background and can commonly be found, so it was just a logical step to include them to their ingame weapon options.

The different melee weapons now give the choice between a ton of attacks, or more power against more resilient enemies.

The Arco-Flagellants received a random-factor based on their constant use of performance enhancing drugs and therefore also an increase in point costs. The unit is still a little fragile, but can be even more devastating when the right drugs proc at the right time.

And that is our little rework on the Adeptus Ministorum Elites. Hope you like the ideas and perhaps you try them out on your own. If so, let me know!

May the Emperor be with you.