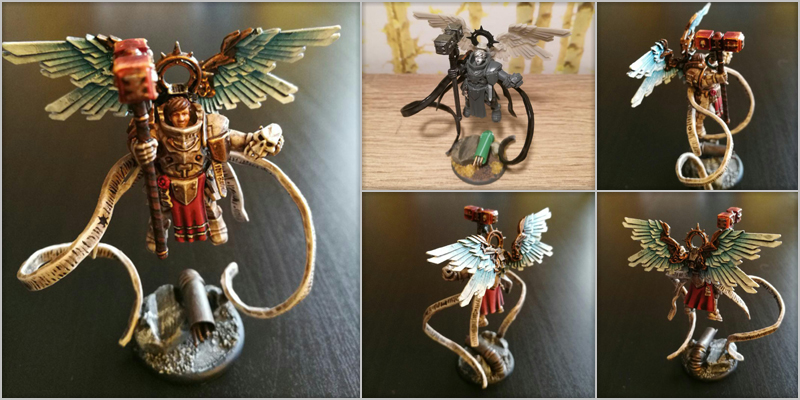 The Saint is finally flying. I found the time to paint her over the last weekend and I am pretty happy with the results. Eventhough I have to admit, that several things went wrong – but I took a lot of learnings and thats great. Especially when thinking about the upcoming Sororitas Knight Project, starting next week 😉 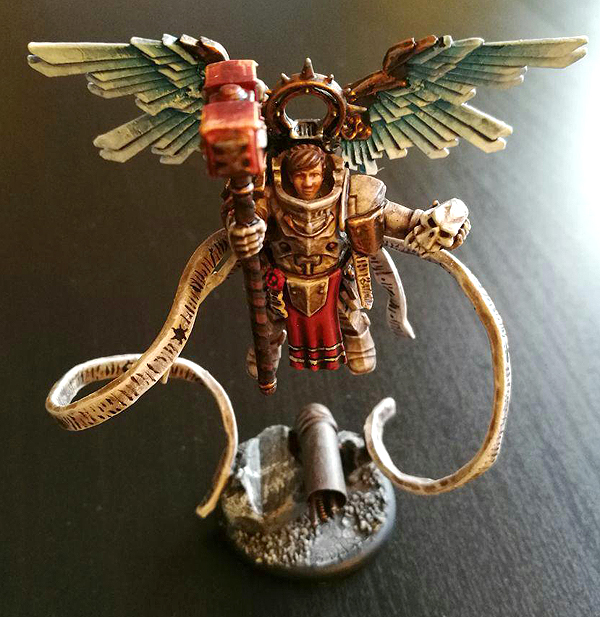 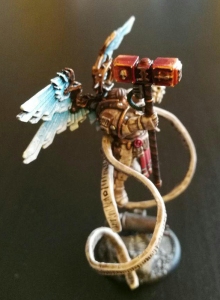 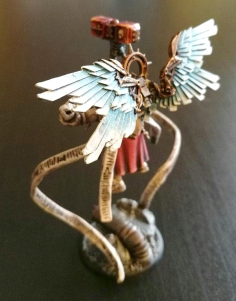 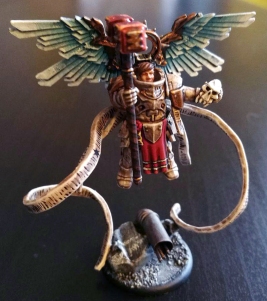 Building and painting this model was a great experience. And it all started with 2 Ideas.

The lessons I learned

Next time I will try to make the scrolls even thinner. I really like my first attempt and was worried that my Saint would be too heavy, but a little less plastic should still do the trick.

Also, the scrolls are too “curled”. There’s just too much going on with them and this really distracts from Nora herself.

I wanted to try 2 new color-schemes on Saint Nora. One was a marble-like armour and the other a white-blue transition for the wings. I painted some wings in the past, but only for my Blood Angels and those went from black to red and white is always tricky.

I have to admit that the marble didn’t go to well. I now take it as a testrun for my Sororitas Knight, which will have a lot of white marble on its armour plating.

I started with a smooth transition from a light brown to white. After that, I added the veins. I started with a brown shade and planned to build up the lines in 3 steps, ending with beige.

As it turned out, the brown shade was too dark and building up the veins didn’t work too well with the used colors. The contrast between the colours was just too hard and the first veins were also too thick. I definitely have to make another test before painting the Knight. 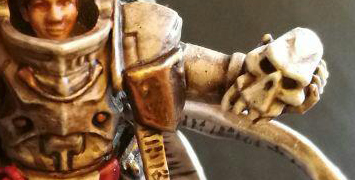 Correcting this wasn’t easy and I couldn’t repaint the whole armour, so I decided to shade the whole plate and dry-brush it afterwards with white, followed by some white highlighting.

But don’t get me wrong, I like how everything turned out in the end, it was just not planned like that.

Before starting with the wings, I painted the whole rest of the model. Simply because I had no idea, in which colours I should paint them. I’m not too good at painting white – strange when you think about my completely white army … But where I like a simple method for my Battle Sisters, I needed more details for my Saint.

So I decided to build up the white colour from blue, finishing with a blue shade and afterwards dry-brushing and highlighting  the wings with white again.

I really like the results, but I was aiming for less blue and more white. The reason is simple though. I used a dark blue shade which is now too dominant and the transition from blue to white should have started with a brighter blue.

I learned a lot about painting marble and white wings and got some additional experience for using old plastic and forming it with a candle. All of that will help me a lot in future projects and eventhough a lot of mistakes were made, I really love my little Saint.

I hope you guys liked this little overview and for feedback, thoughts and critics, feel free to comment!