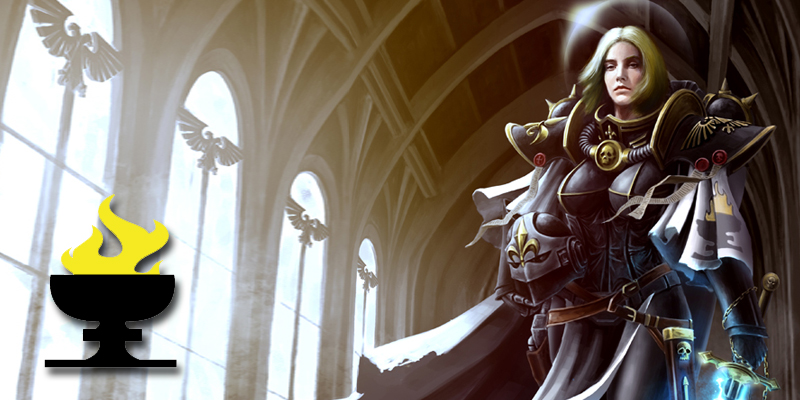 The Order of the Ebon Chalice

(A collection of gathered and mostly copied informations + House Rules)

“We are beset by many terrible foes in these dark times, but we walk in the light of the Emperor, and we shall not let a single foe stay us from our duty. We are the Sisters of the great Ecclesiarchy, and we will fight to the bitter end.”

The Order of the Ebon Chalice is the oldest of the Orders Militant, founded at the birth of the Adepta Sororitas by Alicia Dominica – the patron saint of the Sisterhood. Dominica led her warriors in countless crusades against the enemies of the Imperium, and she was the first heroine to be proclaimed a Living Saint by the Ecclesiarchy. The uniforms of Dominica’s Order are based on the original garments worn by the Daughters of the Emperor and their combat doctrines – based on equal parts religious devotion and training – have remained largely unchanged for four thousand years. The Order’s symbol is a flaming, skull-filled chalice, a representation of the terrible knowledge imparted to Dominica when she was brought before the Golden Throne.

The vestments of the Order of the Ebon Chalice are based on the original garments worn by the Daughters of the Emperor and their combat doctrines -– based on equal parts religious devotion and training -– have remained largely unchanged for four thousand standard years. The Battle-Sisters of this Order wear black-coloured Power Armour covered by white vestments. The vestments have red piping and are also lined in red. The weapons of the Battle-Sisters of the Ebon Chalice are also often painted a deep red in colour.

The symbol of Dominica’s Order is the skull-filled and flaming Ebon Chalice, a representation of the terrible knowledge imparted to Dominica when she was brought before the Golden Throne. Few are aware of the significance of this symbol in Sororitas art.

The Order in Battle

The following rules are based on informations about the new codex of November 2019.

Orders Convictions – Daughters of the Emperor: 5++ FnP against Mortal Wounds. In addition, you may discard a miracle dice when performing an Act of Faith. If you do so, the dice used for the AoF is a 6.

Relics – Annunciation of the Creed: Replaces a Condemnor Boltgun. 24″, RF1, S5, AP-2, Dd3. It can target characters like a sniper and against Psykers does a flat 3 damage.

Stratagems – Cleansing Flames (1 CP): Use when Shooting, either in your own Shooting Phase or Overwatch, choose a unit. Do not roll shot generation for that unit’s flamers. They roll max.

Notable wars of the Order

Faced with the planetary death at the hands of Abaddon the Despoiler’s Planet Killer warship, the Imperium is forced to abandon the world of Belatis IV. Even as key units and assets are withdrawn, cultists hiding amongst the population rise up against the servants of the Emperor, sparking a widespread and desperate struggle for liberation. The Battle-Sisters of the Order of the Ebon Chalice comport themselves with skill, courage and honour, successfully evacuating numerous key Ecclesiarchy officials and recovering several irreplaceable relics before departing upon the last transport to leave Belatis IV.

When the followers of the Cult of Balthalmus plunge Magdellan Prime into anarchy and bloodshed, the Battle Sisters of the Order of the Ebon Chalice bear the brunt of the fighting. The order’s Preceptory Reclusium is repeatedly targeted by the maddened hordes, but holds out against seemingly possible odds until relief eventually arrives. By the time a relief force consisting of Space Marines of the Fire Angels, Sons of the Kraken and Red Seraphs arrives, the Battle Sisters have begun a determined counter-attack and victory is ultimately won.

Chaos comes to the Basilica of St. Mariel on the world of Van Horne in the shape of the Bloodthirster known as the Lord of the Bloodtide. The first to oppose the Daemon’s legions are the Battle Sisters of the Order of the Ebon Chalice, but soon after battle is joined, all contact is lost with the Adepta Sororitas. The Daemons are eventually vanquished with the arrival of the 4th Brotherhood of Grey Knights. Upon their victory, contact with the Imperium is re-established and it is discovered that every Battle Sister on the planet has been killed. The slain are officially elevated into the ranks of honoured martyrs in the eyes of the Sisterhood.

The Orders of the Valorous Heart and Ebon Chalice suffer great losses against Warboss Blackaxe’s Orks and are pushed back to the walls of the Cathedral of Saint Dufaux. The attackers are held back only due to the unyielding determination and sacrifice of hundreds of Sisters Repentia. However, their martyrdom buys time for the Battle Sisters to open the vast cathedral gates. The greenskins are slaughtered shortly thereafter as two dozen Penitent Engines rampage across the battlefield, staining it with Ork blood.

The Order of the Ebon Chalice reinforces Space Marines of the Salamanders Chapter who are engaged in a brutal urban war against the dread Black Legion on the world of Heletine. The enemy is put to the torch as dozens of Immolators and Land Raider Redeemers burn a path through several war-torn cities. Despite the strength of their combined forces, the Imperium’s advance is halted when Lord Gralastyx – the Daemon Prince leading the Chaos forces – unleashes a legion of possessed Chaos Space Marines. As the frenzied Chaos horde rips through the Imperium’s ranks, Battle Sisters and Space Marines fight back-to-back, their bolters and flamers defiantly blazing away as every warrior endeavours to sell their life dearly. However, the allied forces are saved when Saint Celestine appears, falling upon the Chaos horde like an avenging angel. The Living Saint carves a bloody path through the baying horde towards Lord Gralastyx,  before plunging her fiery blade through his tainted heart. With the death of Gralastyx, the Chaos horde is banished into the Warp, but of Celestine there is no sign, for she has vanished as mysteriously as she appeared.

Notable heroes of the Order

The Patron Saint of the Sisterhood, Bearer of the Grail of Ages, and Founder of the Order of the Ebon Chalice, Alicia Dominica is revered throughout the Imperium as both the founder and patron saint of the Adepta Sororitas. In the 36th Millennium, she ended High Lord Goge Vandire‘s Age of Apostasyafter condemning him for his crimes against the Emperor and beheading him with her Power Sword. Shortly after, under the instruction of the newly appointed reforming Ecclisiarch Sebastian Thor, Dominica established the Sisterhood — the Orders Militant of the Adepta Sororitas, with the Sisters later divided between the Convents on Terra and Ophelia VII. She herself became the first Canoness of the Order of the Ebon Chalice. In 650.M36, Alicia Dominica fell at the Battle of Frideswide’s World, surviving hundreds of blows but falling to a single Traitor’s lasgun blast to her heart. She was declared an Imperial Saint by the Ecclesiarchy soon after.

“We remember you, Alicia Dominica. You who received the word of our Father and cast down the apostate. You who returned us to our true path of vigilance and devotion. We remember you and honour you with our words, actions, bodies, and souls.”

—from A Prayer of Remembrance

Palatine Rhiannon was the Sister Superior put in charge of a small task force or Mission composed of fifty Battle-Sisters of the Ebon Chalice sent from the Convent Prioris on Terra to the far-off Calixis Sector of the Segmentum Obscurus. The Mission’s destination was the lawless world of Iocanthos. The Mission’s reason for its deployment to Iocanthos remains mysterious and was initially considered a slight on the Canoness General of the Ebon Chalice already within the Sector, bringing with it many unanswered questions. Only the influence of the Ordo Hereticus has managed to smooth things over between the two factions of the Ebon Chalice now present.

Seraphim Aescarion was the sister who witnessed the fall to Chaos of Sergeant Castus of the Ultramarines 2nd Company. She made it her life’s mission to bring this Heretic to justice. She prevailed after many standard decades and returned the Chaos Champion of Nurgle to the fold of the Imperium. She gave him a chance at redemption by sacrificing himself in the service of the Emperor. Castus carried an Exterminatus-grade weapon within his own body which he used to purify the world of Saafir of the Lord of Plagues’ taint and send the Daemon Prince Parmenides howling back into the Warp.