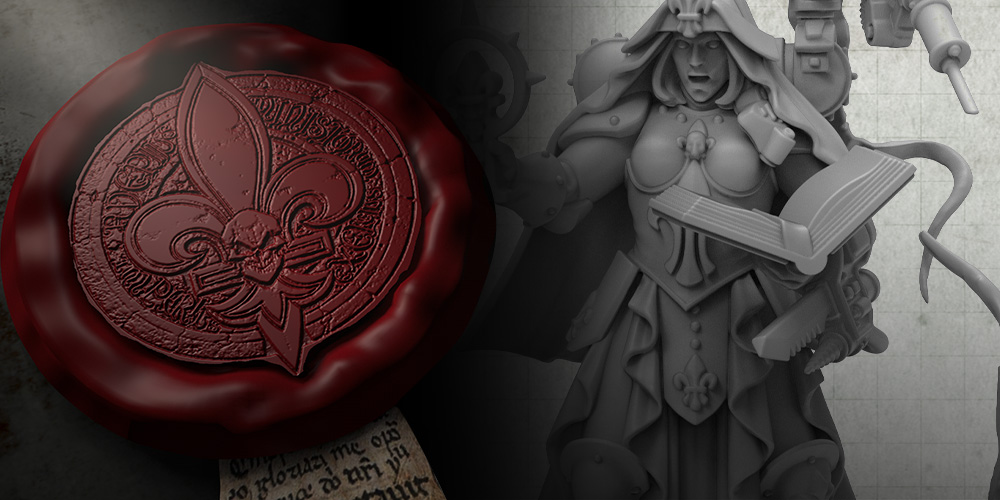 Oh what a glorious day it is – behold the grace of the Hospitaller! Today, Games Workshop gave us the first preview of this wonderful Elite-choice and I have to say, it totally blew my mind. Let’s take a look at the last Battle Sister Bulletin

Despite what you may read in the Regimental Standard, sometimes, even an unshakable faith in the Emperor isn’t enough to avoid suffering terminal injuries in battle. When such a fate befalls one of the Battle Sisters of the Adepta Sororitas, they are attended by a Sister Hospitaller – a grim and sombre matron whose duty is to tend to the wounded or the spiritual needs of the dying. Today, we’re showing you a sneak preview of the new Hospitaller miniature as she continues to take shape… 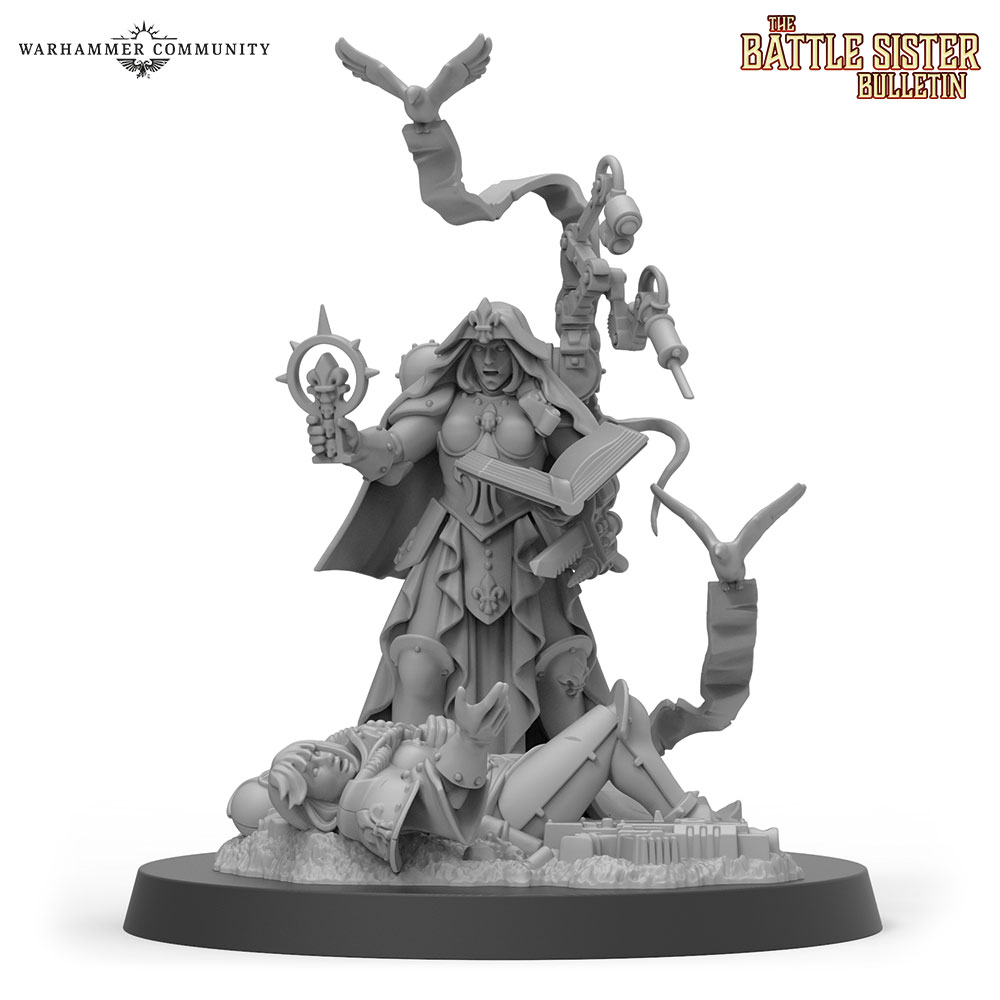 Amazing, isn’t she? The design creates a sense of drama, telling a story much like that displayed by the Primaris Apothecary. It appears that the Battle Sister at her feet is beyond saving, as the Hospitaller is clearly ministering a final benediction to commend her charge’s soul to the Emperor, reading a passage from a sacred tome clutched in her left hand.

With the last of her strength, the mortally wounded Battle Sister is offering up her immortal spirit with an outstretched hand – after all, a warrior of the Adepta Sororitas would never let a minor thing like dying get in the way of showing her dedication to the Master of Mankind! 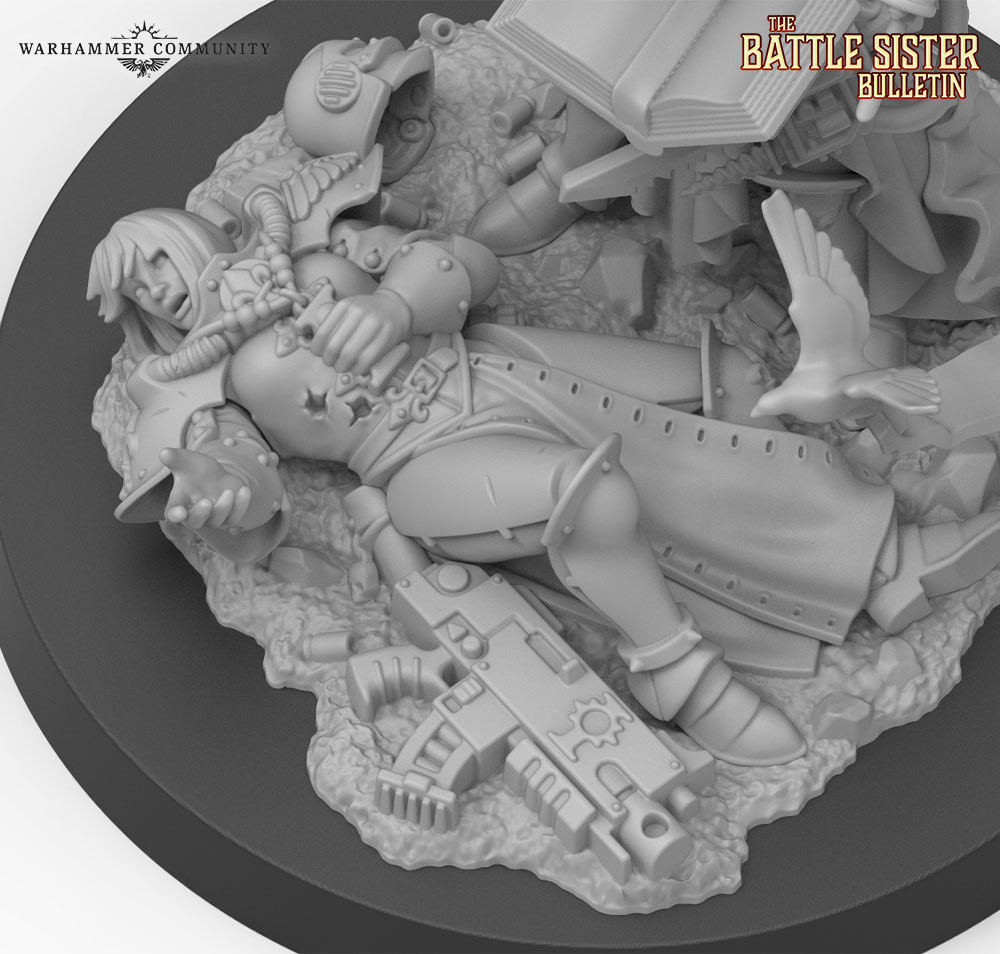 The Hospitaller has loads of interesting details, such as the symbolic doves carrying unfurled scrolls of holy scripture, and the hollow helm (complete with full interior detail!) of the fallen Battle Sister on her scenic base. The new design also features a number of callbacks to the original model (shown below), such as the pleated habit and the optional rebreather mask. 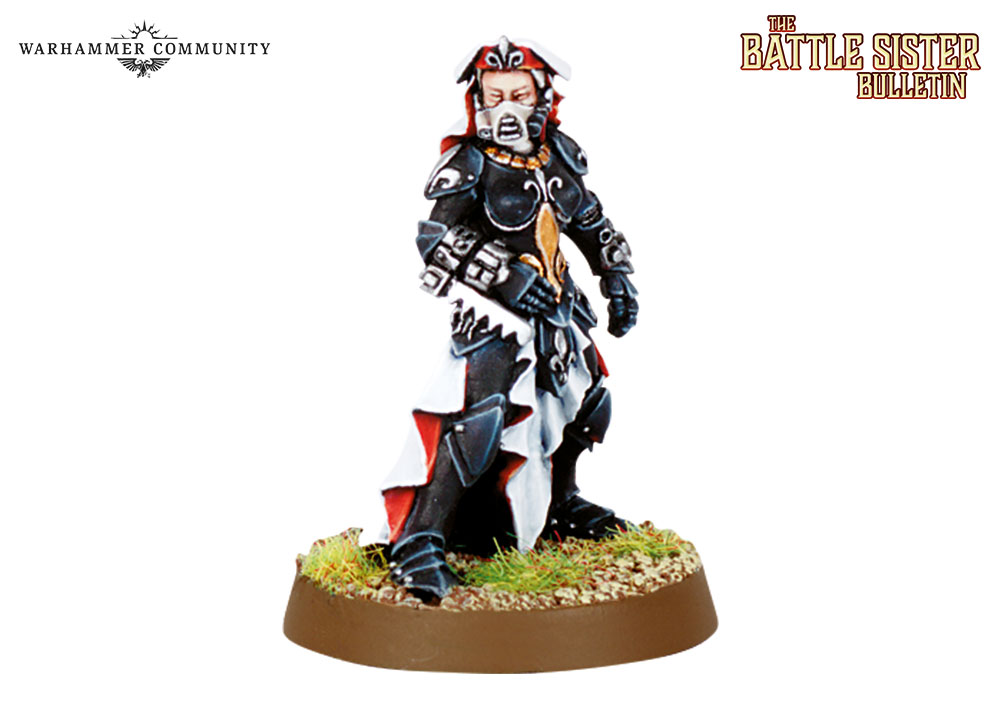 Unlike the previous miniature, the new Hospitaller design is wearing full Adepta Sororitas power armour, complete with backpack. This has the added benefit of making the perfect mount for a full array of chirurgeon’s tools, readily identifying the Hospitaller as a battlefield medic as well as a solemn deliverer of last rites.

As with the bare and masked head options, the monstrance* held aloft in the Hospitaller’s right hand will also have an alternative variation – great news if you’re planning to include more than one Hospitaller in your Adepta Sororitas collection! 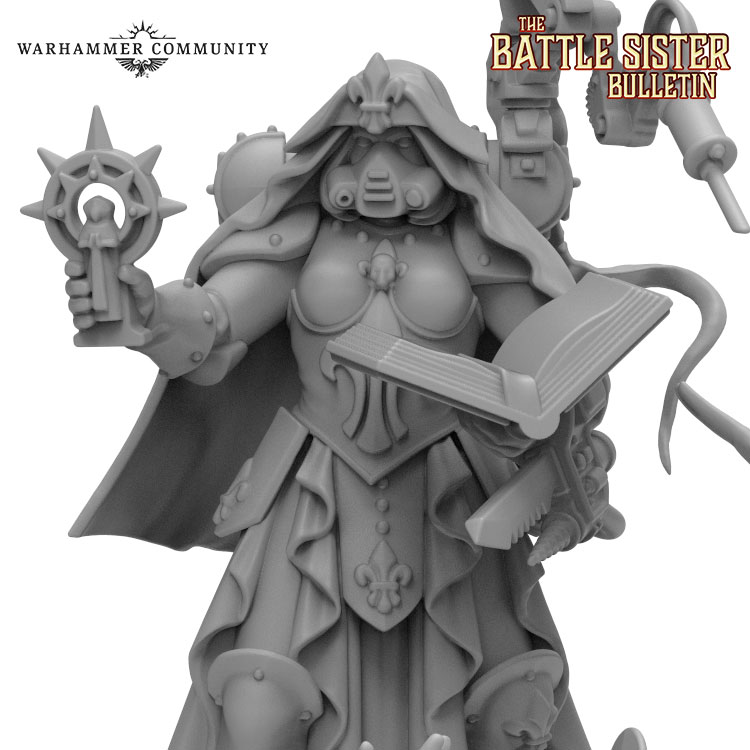 With the Hospitaller set to cater to all your battlefield healing needs, we’ll be back in a couple of weeks with more Adepta Sororitas news. Of course, you’ll no doubt have noticed that this is the 14th instalment of the Battle Sister Bulletin – if you haven’t read all of our previous bulletins, be sure to catch up! You can also sign up to our newsletter to ensure you’re always up to speed on the latest information.

* A monstrance (or ostensorium) is a self-standing icon of holy worship often found on an altar. Suffice it to say that if you walked around an Adepta Sororitas sanctuary, you’d find them all over the place.

I have to be honest, this is by far the greatest model I’ve seen from the new range until now and I can hardly believe it gets better than this. And while this is just my personal opinion, there can be no doubt that this miniature – even though just a render model yet – is a true piece of art.

It is full of details which catch the setting and the mood of this army perfectly and the huge scenic base is a great addition for that. It only begs the question if this base is not stealing the attention from other characters too much 🙂

But beside all the details that Warhammer Community already mentioned, the first thought that came to my mind was how I could use this model to convert other characters. The armour itself may not be as detailed as those of f.e. Canonesses, but the cloak and hood, the doves and simply the stance offer a huge range of possibilities.

So, what do you think. Do you share my excitement? Or do you … just kidding. Everything else would be heresy and you would burn in righteous flames 🙂