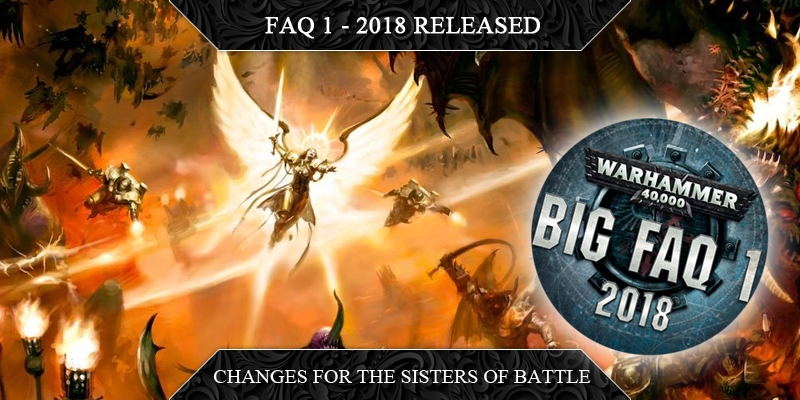 They are finally here, the first big FAQs in 2018 for Warhammer 40.000. And well, there are some pretty interesting changes and some alterations do help us in future scenarios as a Sisters player. Let’s have a quick look at the FAQs and later at the changes to the Index: Imperium 2! For there are also some noteworthy clarifications.

With the exception of Smite, each psychic power can be attempted only once per turn, rather than once per psyker per turn. In addition, unless
the psyker attempting to manifest Smite has either the Brotherhood of Psykers (see Codex: Grey Knights) or Brotherhood of Sorcerers ability (see
Codex: Thousand Sons), you must add 1 to the warp charge value of Smite for each attempt (whether successful or not) that has been made to
manifest Smite during a given Psychic phase, to a maximum warp charge value of 11.
For example, if an Ork psyker attempts to manifest Smite during a Psychic phase in which two other psykers have already attempted to manifest
Smite, then the warp charge value of Smite is 7 for that attempt (note that if the result of the psyker’s Psychic test is more than 10, it still inflicts D6
mortal wounds instead of D3 as normal).

By not having any psykers in our ranks, this rule-update does not have any negative effect for us, but really puts a dampener on smite-spam. As someone who’s often playing against psyker-heavy tyranid lists, I am already happy, eventhough you can’t call that a smite-spam.

Of course, Shield of Faith is great for psychic protection, but in reality, I’m (nearly) never lucky enough to prevent anything from manifesting.

For ous, this means a higher lifetime of our not so resilient HQs and an easier life against character-heavy armies. Both changes I appreciate a lot and which will affect my games at least a little bit.

Furthermore, in matched play games, any unit that arrives on the battlefield during a player’s first turn must be deployed wholly within the controlling player’s deployment zone (even if its ability would normally let it be set up anywhere). This does not apply to a Genestealer Cults unit that is being set up according to the Cult Ambush ability, or to units that are set up after the first battle round has begun, but before the first turn begins (such as those set up via the Forward Operatives or Strike From the Shadows Stratagems).
Finally, any unit that has not arrived on the battlefield by the end of the third battle round in a matched play game counts as having been destroyed.

What do we think about that? Let’s split it up first.

The limitation of units in reserve does not affect us in any way. Even a Seraphim-heavy army will hardly contain more than 50% of them.

The second change could have at least some effect on us – no more sky strike in the first phase with our Seraphims outside our deployment zone. But is this really a bad thing? It’s not. And here’s why.

If your Seraphim need to be flexible, you can still delay their deployment into your first phase. You are limited to your zone, but this is still better than a fix position. And then there is their movement speed of 12″ + a possible Act of Faith, allowing to move up to 24″ in your first turn! This should be enough to either cover objectives or get in range of important targets to take out with your inferno pistols – or both.

And once again, I’m happy about this change. As I said, I play a lot against Tyranids and also against Blood Angels. Both armies will now be a little less scary in the beginning of a match.

All of the units in each Detachment in your Battle-forged army must have at least one Faction keyword in common. In addition, this keyword cannot be Chaos,  Imperium, Aeldari, Ynnari or Tyranids, unless the Detachment in question is a Fortification Network. This has no effect on your Army Faction.

Since I really don’t like soup-lists, that is absolutely fine to me. But on the other hand, I definitely lack the experience to estimate the impact on the Sisters here 🙂

When creating a Battle-forged army, the Battalion and Brigade Detachments are seen as not offering enough command points for the number of units you must include. As a result, we will increase the Battalion Detachment’s Command Benefits to +5 Command Points and the Brigade Detachment’s to +12 Command Points. These  changes appear in the Warhammer 40,000 rulebook errata, but are shown below for convenience.

This is a great one I think. I never got the point of needing 2 HQs minimum for a Battalion, while most other detachments only need 1. And for the same CP outcome. Especially, since I see the Troop-choices as the real backbone of an army.

Personally, I don’t think that Battle Sisters are really strong, but I totally feel their necessity in a common Sisters army. So yes, great change in my eyes! (Same for Brigade detachment, but I rarely use it, so no idea if appropriate 😉 )

Some units have abilities that allow them to ignore damage suffered, and it is possible for some units to gain more than one such ability. These abilities have stacked in an unintended way, and as a result we have changed their interaction
such that if a model has more than one such ability you will now only be able to use one of them against each lost wound. This change appears in the Warhammer 40,000 rulebook errata, but is shown below for convenience.

Warhammer 40,000 rulebookPage 181 – Ignoring Wounds
Add the following as a boxout on this page:
‘Ignoring Wounds
Some units have abilities that allow them to ignore the damage suffered each time it loses a wound (e.g. Disgustingly Resilient, The Flesh is Weak and  Tenacious Survivor). If a model has more than one such ability, you can only use
one of those abilities each time the model loses a wound.’

Now that is a change that really affects us in a bad way. Since every real Sister in our army has a 6+ invulnerable save, due to Shield of Faith, we now lose the second save for our HQ-choices.

Both Celestine and our Canoness have a 4+ invulnerable save per default, making Shield of Faith useless (beside the psychic denial)

While I can totally understand the change and hated the ever repeating rolls, this makes especially our Canoness a lot more vulnerable – yes, a 6+ save can really change everything! 🙂

I will not cover the new rules for organized events and the adjusted point costs don’t affect any Adeptus Ministorum unit.

What’s left, are the changes to the Index: Imperium 2, that simply clarify some rules for the Sisters of Battle. Since we handled these situations exactely as now offically quoted, I will not comment on those. I think they all make sense.

Q: Can a unit with the Acts of Faith ability use that ability
while embarked inside a transport?
A: No.

Q: Can models that are not on the battlefield benefit from Acts
of Faith?
A: No.

Q: If I am playing a mission such as The Relic, which has an objective marker that a unit can carry, and Celestine is carrying that objective marker when she is slain and then returns to battle via Miraculous Intervention, what happens?

A: The objective marker is dropped where Celestine was
slain – she does not retain it when set up on the board
again via the Miraculous Intervention ability.

And that’s it for now. All in all I see a lot of good changes in the right direction and I’m really excited to see their impact on the battlefield.

Do you think the same or do you have some concerns? Is your army getting nerfed or buffed? Let me know in the comments!